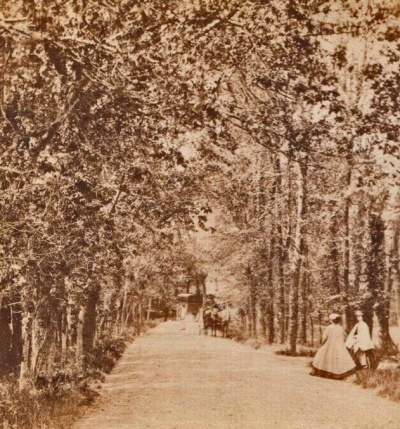 One of the oldest surviving photographs of Vinchelez Lane, taken by Henry Mullins between 1862 and 1865

Vinchelez is an area in the north-west corner of Jersey. It is a cueillette, which is St Ouen's equivalent of the vingtaines found in the other 12 parishes.

It was also a fief until the 15th century, when a dispute between the families owning neighbouring properties which had come to be known as Vinchelez de Haut Manor and Vinchelez de Bas Manor led to its division into two separate fiefs.

As this gallery of pictures, mostly from the 19th century, shows, Route de Vinchelez, the road which passes between the two manors, has long been popular with artists and photographers. Lined with trees on the boundaries of the two properties, which even during the German Occupation, when so many trees were felled across the island for firewood, were left largely untouched, the road has always passed through a tunnel of branches and foliages, making it the archetypal Jersey country lane.

It is commonly known today as Vinchelez Lane.

An amateur photograph from the 19th century
Retrieved from "http://jerripedia.com/index.php/Vinchelez"