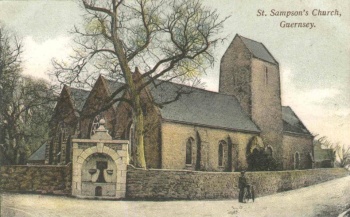 St Sampsons Church is the parish church of St Sampsons, Guernsey. It is dedicated to Samson of Dol, who brought Christianity to Guernsey in about 550 AD.

On Gardner's 1787 Map of Guernsey, St Sampson’s Church is shown on the shore at one end of the Braye du Valle, the Vale Church being at the other end of the tidal inlet, on the opposite bank.

St Sampsons, claimed to be the oldest Parish Church in the Island, stands on or near the site where St Sampson first landed as a pioneer missionary from Dol, in Brittany, about the year 550 AD, and has been a Christian site for worship ever since.

The present church dates from the 12th Century, at which time it consisted of nave and chancel only. Work has been carried out over the centuries, however the church was substantially complete by 1350. The tower has a saddleback roof and the church is of a rugged style like no other in the Island, though similar to St Brelade’s in Jersey and a church at Mont St Michel.

In 1973 the North Chapel was dedicated to the memory of St Magloire, cousin of St Sampson. A pre-Reformation chalice and other relics found in the tower in 1913, included a crucifix, censer and candlesticks, are now displayed in St Magloire’s chapel.

The old regimental colours of the 2nd (North) Regiment of the Royal Guernsey Militia were placed in the church in May 1887.