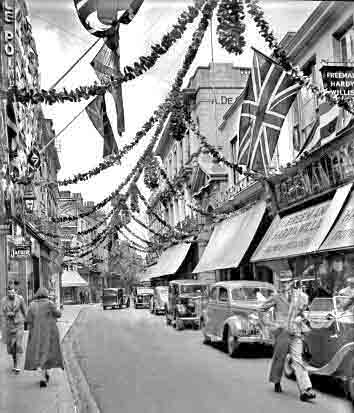 The street decorated for the Coronation in 1937, No 44, occupied by Freeman, Hardy and Willis, is on the right, followed by the block housing A de Gruchy and Company

The 1851 census shows No 44 occupied by Grocer Charles Nicolle and his wife Elizabeth, who had been there at least from 1834. In 1861 the property is unoccupied at the time of the census.

By 1874, as indicated in the advertisement below, the business had been taken over by George Luce for his eau-de-cologne business, which would remain there until 1900, when the shop had become established next door at No 42.

By 1900 the premises were occupied by Thomas Couch (1841- ), a hosier from Cornwall, although the exact occupancy over several censuses and in almanac records is clouded by the appearance of a No 44½ King Street, which seemed to be devoted largely to residential accommodation.

From 1903 to to about 1912, No 44 was occupied first by F Le Poidevin, hosier, and then by J Le Poidevin. We do not know the connection between these Le Poidevins, nor their relationship to father and son James, who were drapers across the street. The James Le Poidevin who came to Jersey from Guernsey and traded at Nos 43 and 49, had a father Frederick, but there is no record of his living and working in Jersey. 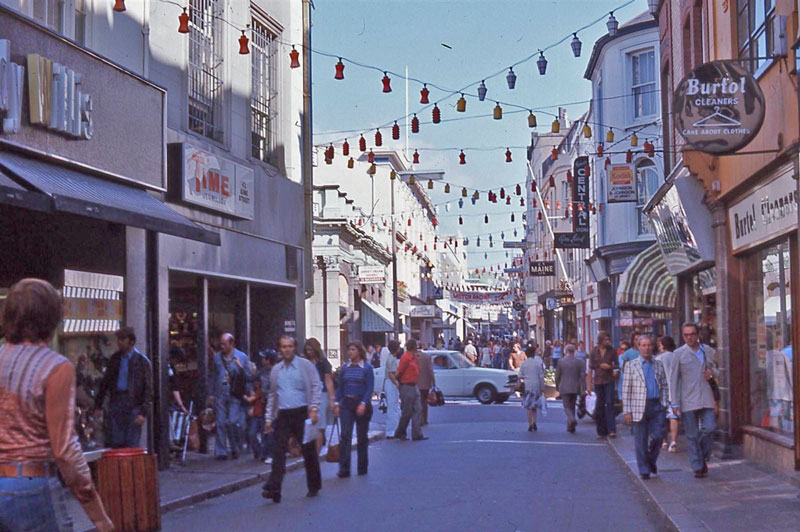 Looking towards the New Street junction. No 44 is on the far left of the picture, occupied in the early 1970s by Freeman, Hardy and WIllis. The street is pedestrians-only but has yet to be paved
Retrieved from "https://www.theislandwiki.org/index.php/No_44_King_Street"